We recently talked about Pizza Express taking a percentage of worker's tips when customers paid by card, however many restaurants operate a policy that is far worse - employees must pay to work. 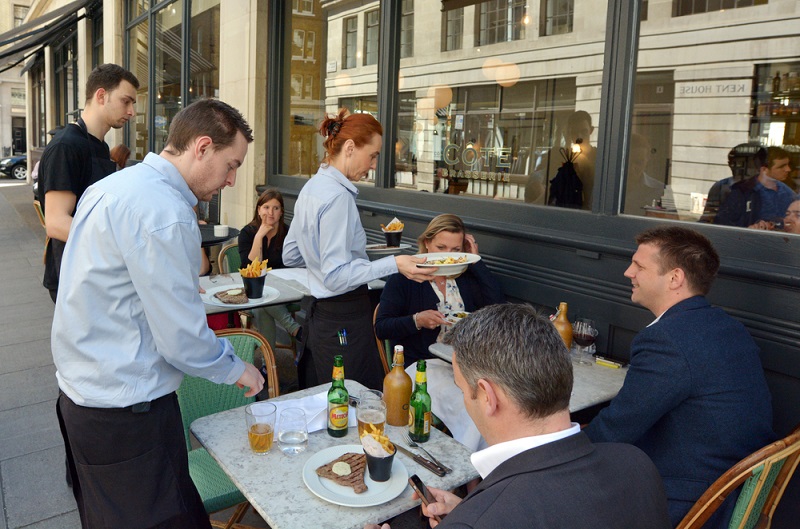 After the controversy surround Pizza express and numerous other chain restaurants, GMB Union have been asked to investigate the tips policies of large restaurants in the UK. The outcome has been shocking and could give rise to a number of unfair deductions from wages claims.

GMB Union discovered that waiters in some large restaurant chains were effectively paying to work as a result of their employer's tipping policy. These policies require employees to hand over cash to their employer, sometimes as a percentage of takings for the evening.

Chain restaurants Las Iguanas and Turtle Bay, require that staff pay back 3.5% of the money taken from the tables they serve each shift. This rises to 5.5% for restaurants in London. This means that where a waiter 'sells' £1000 of food or drink during their shift they will be required to pay back £30 to their employer. The system is designed to provide the employer with a percentage of tips that they can use to share the tips with non-waiting staff, , however the policy does not take into account the amount of tips the waiter actually receives. This can mean that it takes the entirety of the waiters tips for the evening, and even eat into their salary. For example, on a five hour shift a waiter on minimum wage will be paid £32.50 before tax this could easily be taken away form them under the tipping policy.

"The fact that these restaurants are taking money off the waiting staff regardless of the tips they earn is unjust, unfair and downright disgraceful."

The union is pursuing a case against Turtle Bay on behalf of its members. The system can generate a large amount of money for the chains, the Observer reported that in just one week, Las Iguanas took £34,000 of staff tips - equating to £1.8 million per year.

Turtle Bay made comment on the policy which made matters seems even more dire, where staff tips do not cover the 3% required, they must make this up with subsequent tips or if they leave the company this will be deducted from their wages so long as this does not mean they drop below minimum wage.

However, stories have been uncovered where staff have had to pay out of pocket to cover the policy and keep their jobs. One waiter claimed that when she hadn't made enough tips one evening, she was made to cover the cost. She said:

Tipping policies have always been an area of contention and the Labour government had introduced a a voluntary code of practice designed to tackle the worst tipping policies and improve waiting staff standard of living.However, Dave Turnbull, officer for the food and drink sector at trade union Unite claims this is not being adhered to, he said:

"The coalition came in and did not review the code of practice to see that it was being followed.That has effectively opened the doors for restaurants to go back and find new ways to extract money from their staff."

But are these methods of keeping tip even legal? Surely staff cannot be asked to pay money from their own pockets to work? Today at Unlock the Law we investigate some of the most controversial tipping policies.

Can a percentage of takings be deducted from my pay?

The law changed in October 2009 to mean that tips could not make up part of your National Minimum Wage (NMW) pay, this means that any tips you receive are to be paid on top of minimum wage. Your contract of employment should specify when deductions may be made from your pay, and you must receive a written copy of this agreements and authorise the deductions to be made by virtue of the employment contract. Your employer should not force you to pay out of your own pocket for not reaching any requirement they have in place to pay them back tips. If your employer asks you to pay them money, you are entitled to refuse. If your employer threatens your job in this circumstance you could have a claim for unfair dismissal.

If your employer makes deductions from your wages under a policy that you were unaware of , this could be an unlawful deduction of wages and you may have a claim against them . Deductions from tips are permitted and this can be used to cover till shortages, employee rewards schemes, breakages etc.

For further information about when your employer may keep your tips, read our previous article below.

Related > Can my employer keep my tips?

If you think you employer is treating you unfairly, read our UK employment law guides.

Who Will Look After Your Facebook Page When you Di...
Ryanair Told They Cannot Impose a Time Limit for M...