Parma Football Club Not in Liquidation …But a Very Unusual Situation Italian Serie A club Parma is due to celebrate the 20th anniversary of it's first UEFA cup success – however the club may not even hold on that long. 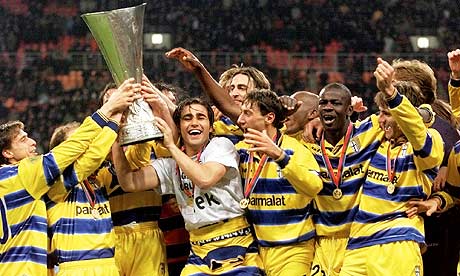 The club who have made the Italian city as synonymous with football as it is with food are in a serious financial predicament.

The club's last game was called off because they could not afford to pay for stewards, the players have not been paid all season and there is not even hot water in the shower rooms.

Roberto Donadoni encouraged the team to compete for a European place and they embarked on a club-record 17-game unbeaten run in Serie A – finishing in sixth place, enough for a Europa spot.

However, they were denied a UEFA licence because of an unpaid tax bill.

Despite their misfortune, they are not yet in liquidation nor is their upcoming bankruptcy hearing a sign of impending liquidation as was mistranslated by a variety of sources.

"Time is running out,"

Today, Parma mayor Federico Pizzarotti is set to meet with club owner Giampietro Manenti to discuss the fate of the club. It is anticipated that the outcome will determine whether or not Parma will go into administration.

Ahead of the outcome of these talks, we take a look at the legal future for Parma.

The Lega Serie A released a statement in defence of the investigation into the clubs finances confirming it would be supporting Parma at their bankruptcy hearing on 19 March.

Last week, the Italian equivalent of the Inland Revenue seized several vehicles belonging to the club in relation to their unpaid tax bill. The club were also given further penalty points last Monday, worsening their place in the league.

As previously mentioned, nobody at the club has been paid since July last year. This includes players. So why haven't the club gone into administration?

How have they avoided administration so far?

The club have stayed afloat this far due to the dedication of the players themselves who have given the club more time to pay their wages.

According to Lucarelli, former owner Ghirardi had told the players in November 2014, that their wages had not been paid as a result of negotiations for the sale of the club.

The club has been sold twice since the players were allegedly given this information, but neither owner has rectified the problem.

Rezart Taci, who purchased the team from Ghirardi, did nothing to address the clubs financial problems then sold the club in February to Giampietro Manenti.

Manenti promised players that payments would be made, Lucarelli claims that Manetti showed the employees of the club bank documents to reassure them that there was money in the club. However the sums represented were outlandish which made the players sceptical.

The new president has repeatedly claimed that overdue payments to employees were being made, but were however being delayed by red tape.
No payments have yet been made.

The players were becoming anxious and thus began to consider legal action against the club. The playing squad had intended to serve an official notice on the club, if they had not received their wages last week. However, they collectively decided to give the club more time.

Their contracts however have been sent to the Italian Footballers Association (AIC) who will then give to the lawyers of the union who will deal with making a formal demand for payment – this would force Parma into administration.

Who is to blame?

Parma is now on the brink of going into administration, and it is not clear who is to blame. Whilst it could be the fault of the sequential owners for allowing the club to fall into such a bad financial state, arguably the Serie A and the FIGC have failed in their duties to adequately regulate. Lucarelli said:

"The Lega Serie A and Federation have to shoulder a great deal of the responsibility, as they only came to see us on Friday. Where were they before that? Why were there no adequate checks? Why was Parma allowed to register almost 200 players? Why was the club allowed to be sold twice for €1? Ridiculous. Here the institutions didn't look after anyone."

Football Italia detailed a plan on Sunday which came from the FIGC to save Parma.

Under the plan, Parma would be given a €5 million loan to cover their expenses for the remainder of the season – they would then enter into controlled administration. This would allow the club to play in Serie B, after relegation, under new ownership. The alternative would be to enter into liquidation and become an entirely new club under the eyes of the law meaning they would need to play in the Lega Nazionale Dilettanti—the amateur division.

At the moment, there are still more questions than answers for the future of Parma football club. However, if the club do go into administration it will be interesting to take a look at who needs to be paid most urgently to allow the club to survive and also how quickly the clubs financial issues to be resolved to allow them to return to playing.

Help! I Have Been Yarn-Bombed. How Can I Retaliate...
So You’ve Gone & Got a Parking Ticket - Legally Wh...