Police have arrested 76 individuals who had been taking part in a major protest at a shopping centre in west London.
Around 600 people took part in the "die-in" protest held in solidarity with American protesters and prompted by the death of Eric Garner. 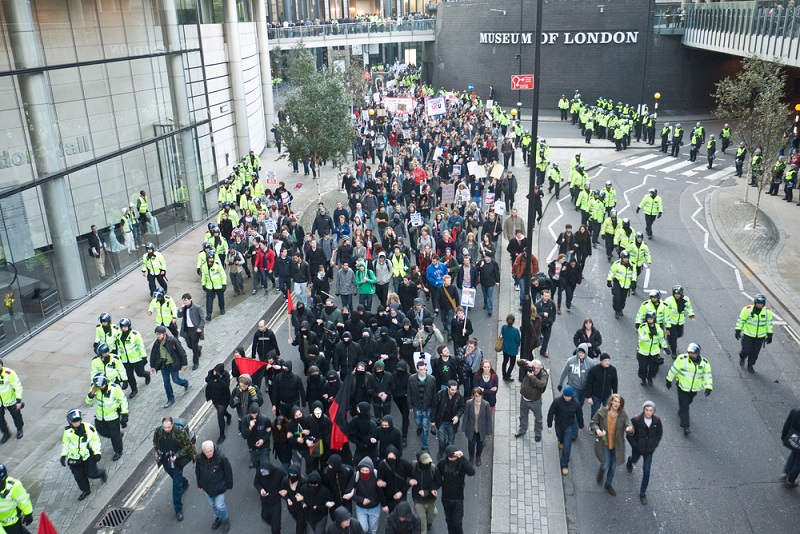 Mr. Garner, a black man aged 43, was stopped on the street in New York in July this year on suspicion of selling loose and untaxed cigarettes. He was wrestled to the ground by police officers and subsequently claimed he could not breath after being held in a chokehold position. He became unresponsive and later died as a result of the incident. The policemen involved were not indicted for the act, prompting riots and protests.

This all occurred against the backdrop of widespread public concern in the United States and beyond over the fatal shooting in August by a police officer of Michael Brown in Ferguson, Missouri and the subsequent decision by a Grand Jury not to indict the police officer involved coming at the end of November – prompting riots and protests throughout the United States.

Two peaceful protests were held in London on Wednesday at the shopping centre where the arrests were made.

The police state that the arrest were made after a group of individuals assaulted security staff, attempted to gain access to the centre after being asked to leave by police. The individuals were arrested on suspicion of public order offences, with one man held on suspicion of assault.

"We will always work with those that wish to demonstrate lawfully - as the majority of protesters did yesterday. However, we will not tolerate the small minority that offer violence or commit other criminal acts, such as that witnessed outside Westfield."

In this post we look at the law surrounding protests and arrests including any obligations you have if taking part in or organising a protest.

Can I be arrested for taking part in a protest?

The right to peaceful protest is an essential component of democracy and one enshrined in the law. The Human Rights Act 1998 identifies both freedom of expression and freedom of assembly as fundamental human rights.

This means, that you should not be arrested for taking part in a peaceful public protest granted that you do not break any laws.

So, why are people arrested during protests?

If you take part in violent or other criminal behavior during a protest, it is likely you will be arrested. The police are under a duty to keep the peace and maintain public order and thus it is still fully within their remit to arrest you even if you are taking part in a protest.

Where people feel strongly enough about an issue to go on a protest, it is not surprising that emotions run high during the demonstration. Often people forget about their obligation to protest peacefully and carry out criminal offences. If protesters do so, the police will intervene and prevent further disturbance from occurring by arresting those involved.

What kind of offences are people arrested for?

Trespassing: You may not simply protest anywhere you choose. If you enter private property uninvited to carry out a protest, you are trespassing and the owner of the property is entitled to report you to the police. The police will then ask you to leave the property and if you refuse you can be arrested for trespassing.

A good example is that during the protests of the financial crisis, many protested outside large banking institutions. Some protesters let their actions get out of hand smashing the windows of certain banks. Those responsible were arrested and charged with criminal damage.

Assault or actual bodily harm: It is unfortunate when a protest intended to be peaceful turns violent. It is normally only very few protesters who use physical violence, but if they do they can be arrested and charged.

What can the police do to control protests?

The police may impose conditions on an assembly, protest or procession if the senior officer present at the demonstration believes that such conditions are necessary in order to:

These restrictions may be on the number of people allowed to attend or the duration of the demonstration.
It is an offence to knowingly not comply with a condition, or to encourage others not to comply. Thee are substantial fines and sentences for those who do not comply with such orders- up to 51 weeks in prison or a fine of up to £2,500.

Those who are planning a march or a procession have an obligation to inform the police at least 6 days before it is due to take place. However, if the march is planned last minute, you should let the police know as soon as possible. The organisers must let the police know:

In response to this, the police have the power to:

The police may also ban all processions or a specific type of procession in any local area for up to three months if it is believed by the local police Chief Constable believes that the police force would be unable to prevent serious public disorder if a march was to go ahead.

What happens if I am arrested at a protest?

Being arrested at a protest does not differ greatly from being arrested in any other circumstance. However, as protests can be very busy and events can occur very quickly, it may be that you are not the person the police intended to arrest. Freedom of demonstration and protesters advice sites recommend shouting your own name if you are being arrested wrongly at a protest – this allows other protesters and witnesses to the arrest to identify you. If possible, you should take note of those who witnessed your actions and arrest.

You will normally be taken immediately to a police station by the officers who have arrested you. Your possessions will be removed and kept safe, but you will usually be permitted to wear your own clothes. You will then be held in custody until you are to be questioned – usually as soon as is practicable.

An officer at the police station will explain your rights to you and make sure you understand how you can expect to be treated whilst in custody. The rights afforded to you are:

Furthermore, if English is not your first language, you are entitled to this information in your native language, and to be given an interpreter.

For information on what happens next, read our guide on the criminal justice system in England and Wales. For Scottish readers, please read our guide to Criminal Law in Scotland, follow us on Twitter or subscribe to our YouTube channel.